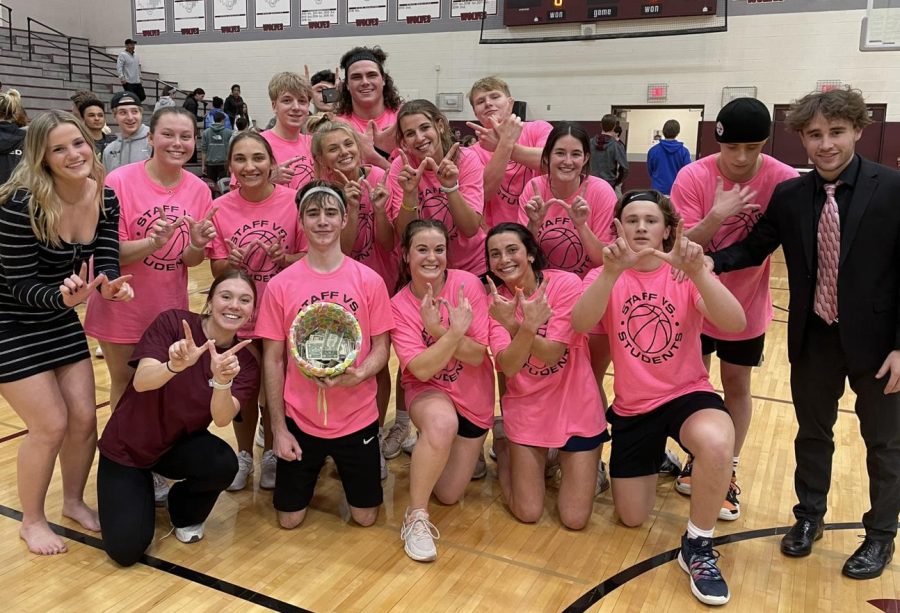 This student basketball team beat the staff team in a highly competitive, overtime, game on April 5, 2022 - via @SchwartzPRSS

Just the overall presence from being at school every single day. Seeing so many of my friends throughout the day, whether that be in class or the hallway, saying “hi” to my teachers, and the overall community feeling that this school possesses is something that I will truly never forget. – Sayak Dubey

I’ve had so many amazing memories at PR but one of my favorite ones was always attending the baseball games, especially when it was warmer outside. It always had a positive atmosphere and parents would bring their dogs and food and it was just so much fun.  – Madeline Durrant

There is no one memory that sticks out far beyond others, but the synthesis of all the learning points with academics, friends, and teachers is what made high school memorable for me and has changed me for the better. – Donald Faccone

When we finished Into The Woods and all the senior boys took a moment for a team meeting and it felt like one of the most relieving yet sad moments in my life. The realization that this would be the end of one story and the beginning of another. We’d all be going our separate ways but we’d never forget our time together. – Forrester Faia

While each year gave me great memories, my favorite memory was winning the regional championship this year with my basketball team because it was against Cary (our rivals) and we broke the school record for most wins in a season. – Kelly Gende

Getting to soak in the applause after a great performance in the musical, especially after closing night of Into the Woods. – Will Green

The football games. They were always such a blast, especially when tons of people show up and dress up. It was super fun to laugh and cheer on such a fun sport and an amazing team.  – Ava Gutowsky

My first Homecoming dance during freshman year. All of my friends went so I went and we had such a good time. – Maria Knox

Final bow in Into the Woods – Bradley Kuhn

I really liked watching Into the Woods.  – Ryan Mangin

The first time we played through the entire Into The Woods musical. When I had first picked up the bassoon two months before the show, I didn’t have the stamina to finish a B flat scale. By the time tech week rolled around, I could play for over 2 hours. Also creating a shrine to Danny DeVito in a band locker with Kayla. (He’s not dead, we just love him.) People genuinely came on the regular to worship and make donations. – Sarah Michalak

Any wrestling home meet. My friend and I were the managers and just anytime there was a meet, especially at home, I felt joy that I can’t get from anything except that. It was just awesome and something I really enjoyed. – Maya Ortiz

Marching band competitions my senior year. Those were amazing; after missing out on the marching band season junior year getting to once again travel to experience other schools marching bands in competition but now as a role model upperclassmen was so much fun. And also getting to arrest Ethan Braun in Curtains. – Limb’rin Ostergaard

Founding and leading a Business/Investment club with my friend Sayak, and being able to compete in competitions. Mr. Seyring was our club sponsor junior year and Mr. Peckhart has been our sponsor this year (both great guys and teachers). – Grant Preves

The best memory from my time at PR was when I was invited to my boyfriend’s senior night last year. I was a junior at that time yet I was able to do the senior walk with my boyfriend and got featured on the senior page in last year’s yearbook – Taylor Runge

All of the exciting, crazy, and funny Homecoming events – Sammie Stebbings

Probably my sophomore year when we beat Cary Grove twice or being a part of the musicals. – Jennah Van Wazer

I enjoyed getting to know people I probably wouldn’t have without certain classes. – Emily Wyatt