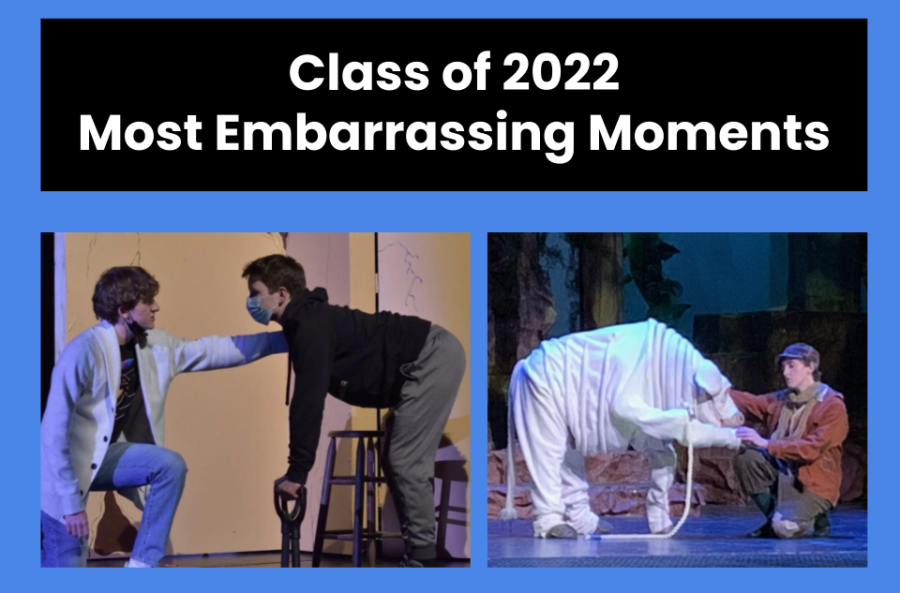 Seniors Will Green and Mitchell Hopkins rehearse as Jack and cow for this year's musical. Will Green remembers rehearsing this scene as one of his most embarrassing moments from his years at Prairie Ridge.

Falling in gym off the bench  – Abigail Ablin

Almost hitting someone in the parking lot  – Alexis Bauman

Getting sung to on Valentines Day – Luke Bounds

Getting stuck to a branch – Victoria Daszynski

The most embarrassing moment I had was at the beginning of senior year, I thought that I knew something about cognitive learning in AP Psychology that Mr.Wadlington didn’t but it turns out what I knew was completely wrong and Wads proved that to me in front of the entire class. It is safe to say I didn’t say anything else for the rest of the period. – Sayak Dubey

Heading into sophomore year in an all-female weight room, having to lift by myself with all the bodily functions and “noises” that come with moving weight. – Donald Faccone

When I was part of my first play at PR, The Curious Incident of The Dog in the Nighttime, I didn’t have many lines but I did have one. When I went on stage for the first time I heard my cue, I went out on stage, looked at my fellow actor, Ross Relic, and stared. I stared some more, until I realized that I had forgotten my line. Thankfully my fellow actor knew how to deal with something like this and so he moved on from me and dismissed my character to indicate that I could exit. I never forgot that line again. – Forrester Faia

Having to caress one of the actor’s faces when he wasn’t wearing his cow costume, and trying not to laugh while singing a song of goodbye to him – Will Green

I once walked into a classroom that I was in but on the wrong period and sat down by accident and everybody was staring.  – Ava Gutowsky

The first day of my freshman year I could not find the Culinary room, so I was late and everybody stared at me. I felt really embarrassed. – Maria Knox

Every time I played volleyball. I’m too short for that sport. – Jenny Lea

Well, freshman year my phone went off while the teacher was currently talking about how our phones should be off. Looking back I wouldn’t care at all nowadays but I was 13 years old so cut me some slack.  – Ryan Mangin

I was running for mayor in a fake French election (I was the only candidate) and my campaign stickers and posters were floating around school for a while and for weeks I had to tell people no, you can’t vote, no, there is no election, and no, despite being the only candidate, I didn’t win.  – Sarah Michalak

When I was cast as Humpty Dumpty in the musical and everyone I knew came to see me in the most hideous, double-wide, didn’t-fit-through doorways giant egg costume. I couldn’t see and kept falling over because I couldn’t see the steps. – Sarah Michalak

Not knowing anything or like basic stuff around the area when I first moved here, people were talking about Casey’s, and Regal and I couldn’t even tell you what either of those were. I’m proud to say I have since gotten gas from Casey’s and seen Batman at Regal. – Maya Ortiz

Learning the wolf dance for Into The Woods. – Limb’rin Ostergaard

Saying something during a class you thought would make people laugh but every single person (even the teacher) remains silent.  – Grant Preves

Freezing during a speech  – Kaylie Quindel

I dropped my portable phone charger in the cat walks during opening night at the musical. It’s big enough to charge a car.  – Emily Wyatt