Policing in Schools: Is it okay to benefit some while exploiting others? 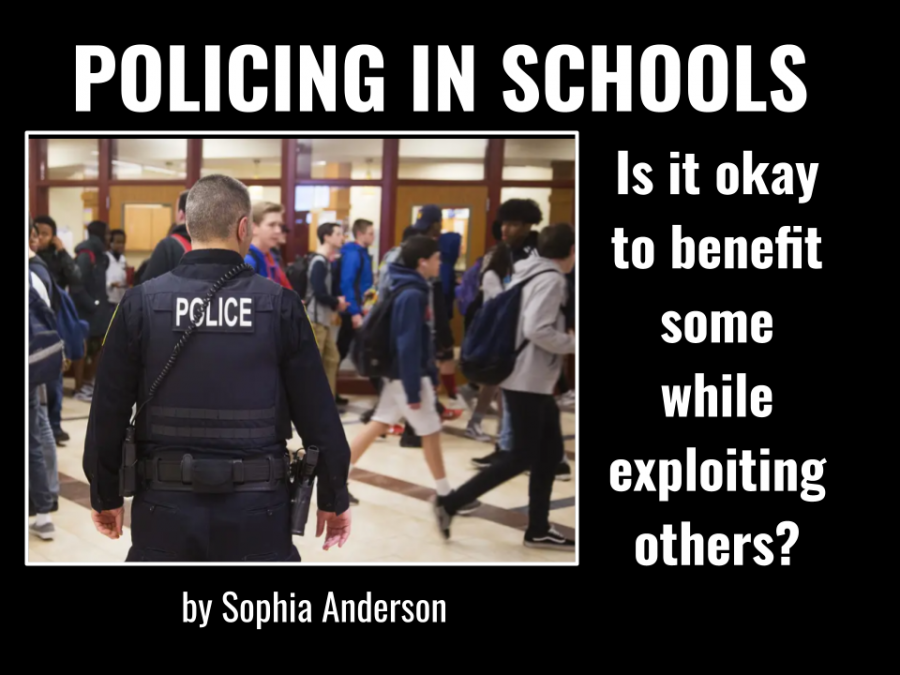 They’re stationed at doorways, they patrol the halls, they monitor the parking lot and the campus – in short, school resource officers (SROs) are simply everywhere, all the time. As much a fixture of Prairie Ridge as the students themselves, their presence is wholly impossible to ignore.

Depending on the school, the students, the location, and the district’s funding, an average of anywhere from one to about five officers are usually assigned to one school. But why were officers installed in schools in the first place?

Since the SRO program went widespread in the 90’s, its primary justification has been defending the safety of students and staff, which isn’t an unnecessary task considering the epidemic of mass shootings that occur across the country predominantly in high schools. School resource officers are also present to defend the sanctity of the law, where they, alongside our administrators, respond to drug offences, habitual truancy, physical altercations, and car accidents on school grounds, among other offenses.

And with that duty to defend the law comes another power: the use of discretion. Discretion comes into play when an SRO believes that a criminal handling of a problem wouldn’t be in the best interest of anyone involved, and when it appears a learning experience could be gleaned from an altercation in the place of hard consequences involving the justice system.

But beyond their role as figures of the justice system, in communities such as Crystal Lake, SROs have started shifting into positions as genuine staff members who do more than simply keep the students in line. Their responsibilities have expanded into playing an active role in the education of students on such topics as the effects of drug use, the implications of addiction, and the realities that come with being caught for a crime, all of which SROs can bring a uniquely genuine experience to when speaking about. So far, Prairie Ridge’s effort of bringing SROs in to speak to Health classes has been beneficial, and helped put parents, teachers, and students alike at ease when it comes to us heading into the adult world where these issues are very real and volatile.

But it would be misinformed to say that these benefits come standard with all SROs and reach all students that interact with SROs. Many are seen only in districts and schools that can afford to spend the time and money on it, which isn’t a promising reality seeing as, as of 2020, the majority of school districts in America are underfunded. And of even more importance, not all schools or police departments that contract SROs have a policy of using discretion; some seem to see every criminal offense, no matter how small or ultimately insignificant, through the unforgiving eyes of pure law and order.

What’s more, staying true to its roots as a decendant of slavery and Jim Crow, those policies that take every offense extremely seriously disproportionately affect black and brown students to a higher degree than white students, making it next to impossible for students of color who make mistakes to both stay in school and receive help if they’re in trouble. The deleterious drop-out rates that many communities with over-policed schools have, then, makes all the more sense.

And consequently, this cycle of (oftentimes) minor mistakes being blown out of proportion and responded to with excessive punishment not only results in an above-average drop-out rate, but also the ostracization of entire communities.

Without education it is extremely difficult for communities and the individuals within them to progress. This has been true in society since the beginning of organized living; when you receive an education to become more skilled, you can move up in life or beyond your past circumstance with a much higher degree of ease than if you did not have an education and were not skilled. And this fact in itself demonstrates the practically unconscionable amount of power school districts and SRO policies wield over the growth of many black and Latino communities, whose children primarily make up the schools riddled with unfair SRO policing policies.

When children are deprived of education through the guise of “maintaining law and order,” oftentimes the only place they have left to turn to afterwards is a more serious crime than what got them suspended, expelled, or otherwise punished in the first place.

And that is the school-to-prison pipeline.

Orchestrated as a legal way to continually bring harm to non-white people, the over-policing and resulting over-incarceration of non-white people was designed in the wake and image of slavery and Jim Crow systems. Simply put, imprisonment of people of color is the government’s easy fix to legally deprive them of their rights. And thus, the intent of the overbearing school policing unique to black and brown communities is fulfilled and consequently leads to the disproportionate incarceration of black and brown people in comparison to whites. Meanwhile, school districts and police departments in wealthier areas – usually composed of a majority of white students – get ahead by using their increasingly discretionary SROs to educate instead of relentlessly reprimand, and keep their communities excelling through the provision of opportunity.

Within the last few years, these massive and historically ignored issues have given way to dialogue about even more factors that should be considered when taking a hard look at school policing, including a lack of accountability for officers, the treatment of students with disabilities in particular, the effects of school policing on mental health, and the importance of a healthy school environment. Students of all colors and socioeconomic statuses in a variety of school environments have reported since the 80’s SRO Program expansion that a police presence on their campus and/or in their building causes them to feel paranoid, overly observed, or as though the entire school environment has consequently become hostile, and the skyrocketing anxiety and depression rates among today’s teenagers are far from bettered by this. And for the students who need school for nothing more than an escape from a brutal home life, a police presence that induces fear and paranoia takes their safe place away.

So, that is the reality.

As a people, I think that morally, ethically, we cannot say yes.