Class of 2020 Shares Highlights from #PRExperience

PR cheerleaders and fans pose for a picture at the 2019 Homecoming game.

Cheering under the lights because everyone is so happy and energized!  – Aaliyah Pooran

Standing on the stage after closing night of Crazy for You. It was one of the hardest and most rewarding experiences of my life and standing on stage knowing we had accomplished it felt amazing.  – Adam Jensen

The endless amount of friendships the hallways of PR have given me, and the people I can call my best friends. – Alexis Kantner

Football games for sure!! It’s one of the best feelings!! – Allie Kiefer

My best memory was cross country because the family I made with my team was one I never will forget. They taught me that no matter what everyone belongs and to enjoy every day. It was a place to come and forget your problems and focus on bonding with each other.  – Alyssa Meade

When my friend pretended to be a freshman in a class, barged in, made a scene, and walked right back out. This happened on costume day for us seniors Homecoming Week and I was crying because it was so funny. – Amanda Heimos

My best memory from my time at PR was my senior night for tennis. While I choked in my match, it was such a beautiful feeling to step off the court and be supported by my parents, my coaches, and my teammates. I love those girls more than anything, and they made me feel so happy and proud to be part of such an amazing team! – Amelia Jensen

Anytime we made state for football just all the boys driving down to state and having a great time and the memories afterwards at the restaurants were unforgettable. – Andrew Khoury

Cheering at all the football games! – Ashley Kmiec

Dressing up for the themes and attending Friday Night Football Games. – Bree Wright

Our first football game this year against Central. The energy of our team, coaches and fans was amazing.  – Brett Nygren

Probably this senior year. I got to see my friends more often, and I got a bit more freedom… At least for the first semester. – Britney Martinez

Witnessing “The Play” by Samson Evans to beat Cary-Grove in the playoffs on route to their second straight state title. What was so great was when we were down with 52 seconds left, everyone on the CG side was already celebrating as if they already won. That game is one of the best high school football playoff games in IHSA history without a doubt.  – Cameron Gablenz

Blowing off school work on Fridays, hanging out with the boys after school and going to the football games really early to get a good spot in the super fan section. Nothing better than FNL and cheering on PR. – Carson Veath

Performing in all of the musicals and theater productions! – Chloe Haegele

For all four years, the speech showcase was my favorite day of the year, just getting to perform my speech in front of a larger audience and hear laughter on a larger scale. Not to mention getting to watch the fruits of my team members’ labor shine at full force in front of an audience – Collin Preves

Going to the football games and meeting a ton of great people. – Connor Hamilton

My favorite memory was the madrigal dinners. It was the culmination of a lot of hard work, and it was really rewarding to see all of that come together in the end – Daisy Kucharski

Making a video about the 1970s for APUSH. Dressing up in awful clothes and acting a fool with your friends is something you didn’t know you need in your life until you do it. – Danny Lewis

The first, last, and only track meet of the 2020 season. That team is so special and I am so grateful that we got to have at least one meet together. – Elise Gregory

All the football games!  – Emily McKnight

All of the time I spent in the art room is something I won’t forget any time soon. It was a place I could be myself and be around people who were similar to me. – Faith Rudolf

Beating Cary 42-7, then beating them again in the playoffs.  – George Concialdi

My trip to Costa Rica during spring break of junior year. I met so many people from not only our school but also from other states and I made so many memories. – Georgie Durrant

Participating in the Epic Race with my friends and running all around the school and also when the fire alarms went off twice and we had to stand in the pouring rain so my bio class of  7 people all huddled to stay warm. – Greta Heinz

My best memory is the football games because it was so fun cheering on the team with all of my friends. – Haley Wegener

Being a part of the set crew for Tuck Everlasting. It was such an amazing musical and everyone worked incredibly hard to come together and do something great. – Heidi Goodale

When our football team went to state! – Jacob Munter

I loved going to New York with the choir. It was so fun! – Jake Koffer

The football games, especially the game at C-G this past season.  – Joie Gindorf

Winning back crossdress day for my senior class. – Joshua Scherrer

Theatre Fest 2019 when we got to stay an extra night because of the weather! – Kailee Pulda

Freshman year when I met my best friend and now boyfriend during lunch. He’s been there for me through thick and thin. – Karen Ferral

Getting to be a part of Kodachrome. Through this show, I learned so much about theater because I was able to experience it from both sides. I worked as a student director and got a unique insight on what it takes to put on a performance. And I got to be on stage as an actor, and was able to bond with my cast mates and create some unforgettable memories as we told a really beautiful story. I can’t think of a better show to have been a part of!  – Kayla Hochman

Going to state and having Prom on the boat! – Kendal Skiermanski

My best memory was when our football team was playing at Cary-Grove’s field and we had the biggest turn out for a super fan crowd I have ever seen. Being in-front of the crowd and leading them to cheer our football team into victory was a memory I will never forget. – Kenzi Iddings

My final year on sound crew. Being crew head, having a top notch crew, being able to explore more about the field and work on projects, and making excellent friends along the way. – Kevin Akerberg

Beating Deerfield to go to State for football – Kyle Koelblinger

All the fun times with my friends at commons.  – Leah Hanacek

Being a superfan leader on Friday nights and basketball games. The energy PR brings is like no other. – Macy Biggam

I think senior year was my best memory in itself. I think senior year you have more freedom and fun. This is also the year students try to make the most memories because it’s their last year in high school. The only bad part is that unfortunately the seniors this year got their senior year cut off early, and they had to miss out on a lot of the things they were looking forward to.  – Maddie Schwantz

When the Fall Play got chosen to go to the Theatre Festival to perform in front of hundreds of people from around the state! I got to go with such an amazing cast and crew. – Mia Coliflores

My favorite day of the year is the day of the Homecoming parade when we do our 5am run at the school, eat a team breakfast, decorate the homecoming float, walk in the parade after school, have another team meal at the school, and go to the football game. There’s nothing more fun than being able to spend sunup to sundown with all your favorite people. – Mia Storz

When I got to perform my humorous interpretation this year at the speech showcase this year and I got the audience to laugh at my jokes. – Neha Konjeti

Playing Irene in the musical! I had so much fun every night playing that part, and I would do it again in a heartbeat. – Nina Gregory

Getting the chance to go to the state football games, and definitely having prom on the boat! – Payton Andrlik

Everything at PR–dances, sports, activities–were all great memories, but my best memories at PR were meeting Reanne Weil in freshman year PE to find out she would be my best friend and doing the intro to Cars on the Prom Bus – Peyton Richardson

Superfanning every single football game I could – Rebekah Piotrowski

Being done with first semester finals when I was a freshman. I remember being so stressed about it the entire week, and it felt so good to have all of my tests done afterwards. – Ryan Fist

Playing in the 2019 6A football state championship game. It was a surreal moment playing in that stadium in front of all of my friends and family and something I will never forget. – Ryan Goudschaal 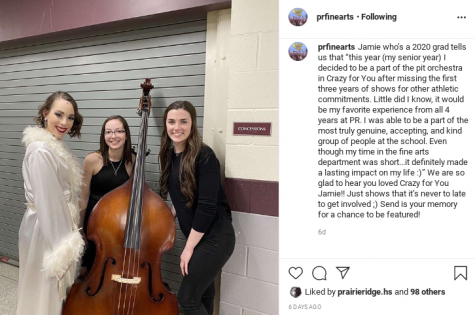 Being a part of Crazy For You! – Sabrina Vlk

Friday night lights with all my friends on the bleachers or any school dance was so fun, getting ready for and taking pictures with friends and then after the dance going to IHOP or Steak and Shake to eat was the best. – Samantha Loudon

Lunch with my friends every day. We were probably considered the “weird table,” but we had so much fun!! – Sarah Pollastrini

Anytime someone made an effort to talk to me or stay friends with me. I definitely wasn’t the popular kid or the cool kid when I was here, and because of it I never thought I’d be worthy enough of any sort of decent friendship or good conversation. It absolutely brightened my mood 10 fold when anyone decided to change that outlook for me and treat me as one of their friends. – Sid Lara

My best memory was meeting my boyfriend <3 – Sierra Siebert

Prom 2019 when I danced on the boat and hung out with a great squad. – Spencer Alvey

The homecoming game last year when I met my boyfriend. – Tia Adams

Either performing in The Complete History of America Abridged and going to state or performing in the Madrigal dinners with my friends as the head Wench. – Torie Mertens

My junior Prom because it snowed that day but the day before it was so nice out so when my date was driving me to pictures he had left his sunroof open from the other day and forgot about it, so when we stopped at a light all the snow fell in the car on me. I was very upset at the time but looking back I laugh and it is a good story to tell. – Victoria Fisher

Being able to go out to lunch with a big group of friends! – Victoria Wojcik

When I went with the choir and band to Disneyworld and we got to see the fireworks in front of the castle. – Zoe Riordan