Results from the Illinois Primary 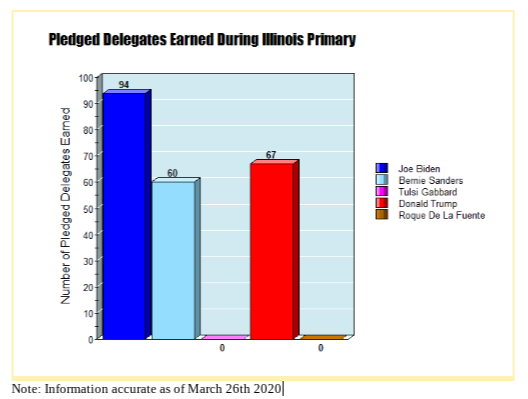 On March 17th, Illinois along with the states of Arizona and Florida held their primaries. During Illinois’ contest, 155 delegates were given out to Democratic candidates, and 67 were allocated to Republicans in their individual primaries.

The Democratic field has shrunk from dozens last year to just three contenders, Joe Biden, who is a former Senator of Vermont and the former Vice President to Barack Obama, is the clear frontrunner of the race. Who was once viewed as the leader before Super Tuesday, current Senator of Vermont Bernie Sanders has lost ground, and lies in second place. Finally, Hawaiian representative Tulsi Gabbard, participated in Illinois’ primary, and remained in the race until March 19th. Although she only received two delegates of the over two thousand pledged so far, she remained in the contest longer than most. Being a moderate candidate herself, the first Hindu member of Congress endorsed Joe Biden.

Donald Trump, the current Commander and Chief, faces no serious competition from the Republican party. It is extremely rare for a president (who has been voted in) not to be chosen as their party’s nominee for re-election. In fact, it has only occurred once. Democratic President Franklin Pierce, who had won the election of 1852, was denied the party’s nomination again four years later, James Buchanan, who would go on to become President, secured the Democratic party’s nomination in 1856.

Being the 6th largest state in the country by population, Illinois’ 102 counties offer a large perspective on the Midwests’ attitude toward politics. The Prairie State has gone blue in the past seven Presidential elections, from 1992-2016. However, a quick glance of a county-by-county map from the 2016 Presidential election shows a majority of the state colored red, with 90 counties voting Republican.

Although an overwhelming amount of counties in Illinois voted for Republican candidate Donald Trump in 2016, Cook County did not. Being the largest county in Illinois and second largest in the country, Cook County holds over 5 million residents and is the location of Chicago. Home to the Windy City, Cook County was responsible for nearly 38% of all votes casted in Illinois, of which over 1.6 million went to Democrat Hilary Clinton. Illinois’ 20 electoral votes would go to Clinton in 2016, with the former first lady receiving just over 3 million votes. This means that votes from Cook County alone were responsible for about 50% of Hilary Clinton’s support in Illinois during the 2016 election. In addition, the next four biggest counties went blue in 2016 as well. DuPage County, Lake County, Will County, and Kane County voted majorly Democrat in 2016, providing Clinton with 655,309 votes, or about 21% of her support in the state.

March 17th was a major victory for former Vice President Joe Biden. He received 924,771 votes, which amounted to 59% of Illinois’ popular vote. He received 94 delegates. Bernie Sanders, who placed behind Biden, was allotted just 36.1% of the primary vote, or 565,762 votes. Sanders’ second place finish provided him with 60 delegates. Finally, Tulsi Gabbard, who exited the race two days after the primary, came in 5th place, with 0.6% of the vote. With just 9,118 votes, Gabbard performed worse than multiple candidates who had already ended their campaigns.

*Only 154 of the 155 delegates have been given to Democratic candidates so far. These results are accurate as of March 26th, 2020

The Republican Primary helped show Donald Trump’s unquestionable popularity among conservative voters. Scoring all 67 of the delegates available, the current President received 96% of Illinois’ popular vote, with 510,662 votes. Roque De La Fuente, the only other candidate on the Republican ballot in Illinois, only received 21,044 votes, or 4% of the popular vote.

Containing 307,789 inhabitants, McHenry County is the 6th most populated county in the Land of Lincoln, and home to Prairie Ridge High School. Recently, the county has voted red, with a majority of Mchenry’s vote going to Republican candidates. During the 2016 presidential election, Donald Trump received 49.8% of the county’s popular vote, with 71,612 votes. Hilary Clinton scored 42.2% of the vote, which equated to just over 60,000 votes. Third party candidate Gary Johnson received 5%, or 7,180 votes.

The 2020 Democratic primary showed Joe Biden’s strong support in Mchenry among blue voters. He came in first place, earning 18,426 of the 30,716 votes (59.99%). Finishing in second, self proclaimed Democratic-Socialist Bernie Sanders received 11,033 votes and therefore support from 35.92% of blue voters in the county. American Samoa native Tulsi Gabbard came in 6th place with just 107 votes. Despite still being in the race at the time of the primary, Gabbard performed worse than Elizabeth Warren, Michael Bloomberg, and Pete Buttigieg in McHenry. All three of these candidates had dropped out by the time of the Illinois primary.

Unsurprisingly, Donald Trump championed the McHenry primary vote. In Receiving 20,745 of the 21,731 votes given out to Republican Presidential hopefuls, the incumbent President proved his popularity. Roque De La Fuente, Trump’s only competition, gained 986 votes, or 4.54% of the Republican vote in Mchenry.

COVID-19, more popularly known as the Coronavirus, seriously impacted voter turnout during Illinois’ primary. Decreasing by 25%, only 1.54 million votes were cast on March 17th in the state, compared to 2.06 million votes in 2016. The global virus most certainly played a factor in low voter turnout.

According to USA Today, polling locations in Chicago suffered from a shortage of volunteers, and a request was sent to J.B. Pritzker, the governor of Illinois, to postpone the election. Although city officials claim their request “was denied,” Pritzer’s staff say this is not true. The governor later explained in a news conference that he does not have the ability to change the date of a state primary.

Interestingly, voter turnout actually improved in the other two states that held their primaries on March 17th. Arizona, which had 468,461 voters participate in the 2016 election, saw 62,855 more votes cast in 2020, an increase of over 13%. In Florida, voter turnout went from 1.7 million in 2016, to 1.75 million participants this year. A reason for this, along with increases in population, was the large amount of early voting among the two states. Nearly 400,000 of Arizona’s participants voted early this year, and almost 440,000 did in Florida.