The Early States: An Overview Of The Democratic Primaries & Caucuses 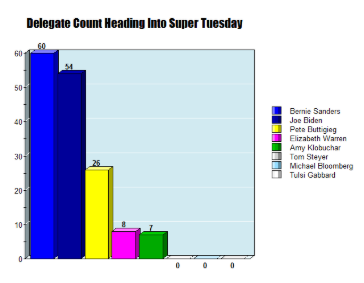 Although they have delegates heading into Super Tuesday, Pete Buttigieg, Tom Steyer and Amy Klobuchar have dropped out of the race for president.

With Super Tuesday coming up, it is only fitting to look back on the results from the first four states in the primary and caucus process.

Iowa, New Hampshire, Nevada, and South Carolina, being the early states, are valued highly by the candidates. This is because these states are seen as an opportunity to gain momentum for the long trail ahead. These unique parts of the country have widely varying demographics and thus produced wildly varying results.

Being the first state to cast its delegates every election cycle, candidates put a lot of money and resources towards swaying voters in the midwestern state.

How did the candidates perform?

On the night of February 3rd, the caucus results were not immediately available. Due to internal mistakes, correct results from the competition were not available to the public for many days. The debacle created concern over the Caucus system, as it’s complicated nature is hard to understand for the average citizen. Many critics feel that the system is unnecessary and inferior to primaries that use a standard popular vote.

With 24 pledged delegates up for grabs, the New Hampshire primary gave the candidates an opportunity to see if their time and money was well spent in The Granite State.

Leading up to the primary, the candidates spent differing amounts of time in the state. Tulsi Gabbard, a Hawaiian congresswoman, made 96 visits to New Hampshire. Entrepreneur Andrew Yang made 62. The frontrunners dedicated substantially less time to the state when compared to the candidates mentioned above. Bernie Sanders visited just 30 times, Mayor Buttigieg 40, and Biden only made 25 stops to help build support..

How did it go?

The first primary of the race produced a close finish. Bernie Sanders was able to take first, with 25.7% of the popular vote. However, Mayor Buttigieg finished closely behind with 24.4% of the vote. He fell to the Vermont Senator by just under 4,000 votes. Despite the narrow victory for Sanders, both candidates received nine delegates. Additionally, Amy Klobuhar had a breakout night. The senior Senator of Minnesota scored 19.8.% of the vote, and was awarded six delegates.

News After The Primary

On the night of the New Hampshire primary, two Democratic candidates ended their campaign. After disappointing results, Andrew Yang and Senator Michael Bennet dropped out of the race. Despite spending over $3 million on campaign ads in the state, Yang managed to only receive 2.8% of the primary vote. With only spending a little over $50,000 in political ads in the state, Bennet only received 963 votes, or just 0.3% in New Hampshire.

February 2nd brought the second set of caucuses of the trail in The Silver State. The western state provided the most diverse demographic yet, with a Hispanic population of just under 30%. Iowa and New Hampshire, the two prior states, each have populations that are about 90% caucasian. Nevada helped show a bigger picture of how different groups of people in the country think towards the Democratic candidates. The state provided 36 pledged delegates.

Three days prior to the Nevada caucuses, the ninth Democratic debate was held in Las Vegas. The  night welcomed a newcomer to the debate stage. Michael Bloomberg, a former New York mayor and billionaire, is the most recent candidate to join the race. He has interestingly avoided dedicating his fortunes to the early states. He was not on the ballot in Nevada, and thus received zero delegates.

How did the caucuses go?

The story of the night in the pacific state was Vermont Senator Bernie Sanders. Receiving 24 pledged delegates, Sanders lengthened his lead and established himself as the Democratic frontrunner. Joe Biden, who was once considered the leading candidate, fell further behind, with a second place finish and just nine delegates. Additionally, Pete Buttigieg gained three delegates.

With just one more primary until Super Tuesday, South Carolina helped show what the African American community felt about the candidates. About a quarter of the southern states’ population is African American. This is a significantly higher percentage than the three earlier states. With 54, South Carolina had the most delegates to offer out of any contest so far.

Despite not being a top tier candidate, philanthropist Tom Steyer did relatively well in The Palmetto State. A polling average from RealClearPolitics (RCP), placed Steyer in third place, with 11.3% of the vote going into the primary. In stark contrast, the billionaire regularly finished at the bottom of most national polls. A poll from Morning Consult, conducted from February 26th-27th, placed him in 7th place. The poll had 5,334 participants, and had the billionaire at just 3% nationally.

How did the candidates finish?

The first southern primary of 2020 went to the former Vice-President. Joe Biden not only captured a plurality of the vote, but nearly got a majority in South Carolina. With 48.8% of the popular vote, Biden gained 39 pledged delegates, and reminded the rest of the field he is here to stay. Following in second, Senator Sanders was awarded 15 pledged delegates, with 19.9% of the popular vote. Over 150,000 votes separated Biden and Sanders. Tom Steyer also did notably well with 11.3% of the primary vote. He did not receive any delegates.

Despite a third place finish in the state primary, Tom Steyer decided to terminate his candidacy. The environmentalist stayed optimistic and claimed that he had “zero regrets”  and that meeting his supporters along with the American people “was the highlight of [his] life”.

One day after Steyer left the race, former mayor of South Bend, Indiana, Pete Buttigieg also decided to drop out. Although Mayor Pete was always considered a top tier candidate, he was never able to become a frontrunner. The 38 year old was both the youngest and only openly gay candidate in the race.

Right before Super Tuesday, Amy Klobuchar dropped out of the race on the 2nd. The Minnesota Senator had failed to gain a substantial base. Besides her stunning performance in New Hampshire, Klobuchar was unable to contend strongly in the early states. She has made the decision to endorse Joe Biden, who is also a moderate candidate.

Looking Ahead to Super Tuesday

In total there were a total of 155 pledged delegates given to the candidates throughout the month of February. Although the number of delegates from the four early states were highly analyzed and given much attention, the number is a fraction of the amount that Super Tuesday offers. On March 3rd, 1,357 pledged delegates will be given out to the candidates from 14 different states and American Samoa. This equates to about 34% of the delegates that are awarded throughout the whole primary and caucus season. Although Senator Bernie Sanders has a slight lead heading into Super Tuesday, a true leader of the Democratic pack can’t be realistically claimed until the enormous amount of delegates are handed out this week.