Preves Brothers Reflect on the Pandemic 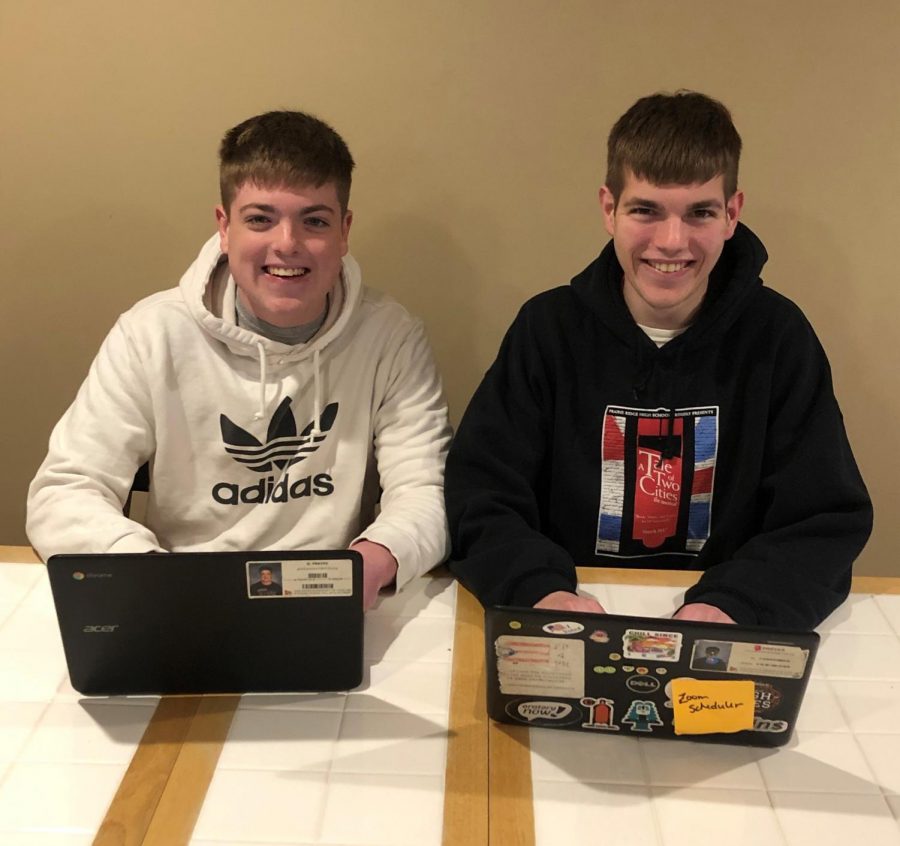 News team members Grant and Collin Preves are spending more time at home together since PR started e-learning days due to COVID-19.

Initially, I believed the COVID-19 virus was not a big deal, and was being blown out of proportion by the media. The endless talk of the virus by classmates period after period became old very quickly. It always seems that after a notable event occurs, everybody and their uncle becomes an expert on the topic. Early on, I felt indifferent about the global event and even debated with friends about the virus’ severity. The argument I put forth was the fact that illnesses such as seasonal influenza affect countless more people than the coronavirus.

However, my opinion began to shift once one of my friends mentioned the difference in mortality rate between the standard flu and COVID-19. The new virus, which has a global mortality rate of about 4% seemed low at first, until I compared it to the flu. At under 1%, the percentage of people that die from influenza is quite small.

My thoughts continued to shift towards viewing the coronavirus as something serious after I wrote an informative article about the topic.

Through reading statements and learning more from the Centers of Disease Control and Prevention (CDC) and World Health Organization (WHO), I was able to better educate myself on the topic. Elements to the virus I did not consider before doing research helped me realize that COVID-19 is not something to be taken lightly. Two main characteristics about the virus that stood out to me is the lack of treatment available for the coronavirus and that no one in the world has developed an immunity to it. These stark contrasts to influenza make me realize that my earlier comparison of the two illnesses was quite wrong.

Although I gained a better perspective on the seriousness of the illness, it is also important to keep in mind that the world is not doomed.

Despite over 200,000 confirmed cases so far, with billions of humans on the planet, this situation is still extremely manageable. China, who has suffered heavily, seems to have an effective approach to containing the virus. The totalitarian country’s strategy of city-wide quarantines shows success but would not go over well in the United States. I believe government intervention is necessary to help keep things under control, such as cuts to interest rates, but widespread shutdowns feel premature.

I feel as though school being canceled from March 16th-20th was unnecessary. Illinois could have waited until spring break before doing anything drastic. As usual, it would seem that a balance between shutdowns and indifference is needed. We will have to put trust in our government to do the right thing,

As a 16 year old, living through a pandemic is very interesting and nerve-racking. Seeing the effects that COVID-19 has had on the economy is quite disheartening. The stock market has entered a bear market after a 30% drop, and there are fears of a recession. However, I am confident the world will handle the virus, and the economy will rebound.

What will matter is how the American government responds. Will the measures they take be too drastic or not drastic enough? Hopefully, they will be able to find a sweet spot that does not hinder individual liberty too much, but also keeps the public safe.

When the whole ordeal began, I was rather oblivious to the threat the coronavirus presented. I’ve always been one of those guys who was optimistic that “it wouldn’t happen to me.” In fact, being a student in consumer ed at the time, the very first side-effect of the coronavirus that became apparent to me was that it was causing the stock market to tank. As time wore on, more news began to spread regarding the virus’ spread, I became progressively more nervous, but I decided to focus on how China’s shutdown was actually helping global warming instead.

When rumors began that school would be cancelled is when I started sweating bullets.

Naturally, having school cancelled and learning being continued at home would be a major inconvenience. School technology was and still is struggling to take flight following being shot down by the malware problem a few months ago, and I knew I didn’t have the patience to deal with its flaws at home. On top of that, being isolated from friends and teachers that we’ve become accustomed to seeing on the daily didn’t sound too ideal either. Not to mention the fact that all extracurriculars were already starting to be cancelled. Crystal Lake Central’s production of Fiddler on the Roof was shot down on its one week for performance, and with activities like Spring Play, Senior Musical, Prom, and various sports seasons coming around the corner, a school cancellation wouldn’t be ideal.

With all of this in mind constantly plaguing my mind throughout the week, at the point of the closing, I was fuming.

To be honest, my anger was warranted, to a point. I thought that a cancellation like this would stir up fear, something that had been running rampant in our country since the pandemic began, and when fear exists, someone could come along and take advantage of it. However, as the week progressed, I was given some new perspective.

Granted, I’m not able to see my friends and teachers, but I’ve had more consecutive meals with the whole family than I can remember. I’ve had lots of time to spend with my brothers and time to spend on my work without the stress of time constraints. Granted, both of those would probably be defeated by regular e-learning, but nonetheless, it’s been a great opportunity.

To be fair, the situation could be a lot worse. Looking at countries like Italy that are experiencing hundreds of deaths daily, I feel lucky that I live in this isolated county. It took awhile for me to understand the gravity of the situation, and to move beyond the inconvenience it would cause me. However, I’m already starting to miss school, and I certainly hope that the whole situation begins to get better so I can get back to my family and PR, my home away from home.