Why The Electoral College Is Flawed

And Why The Popular Vote Is A Little Better 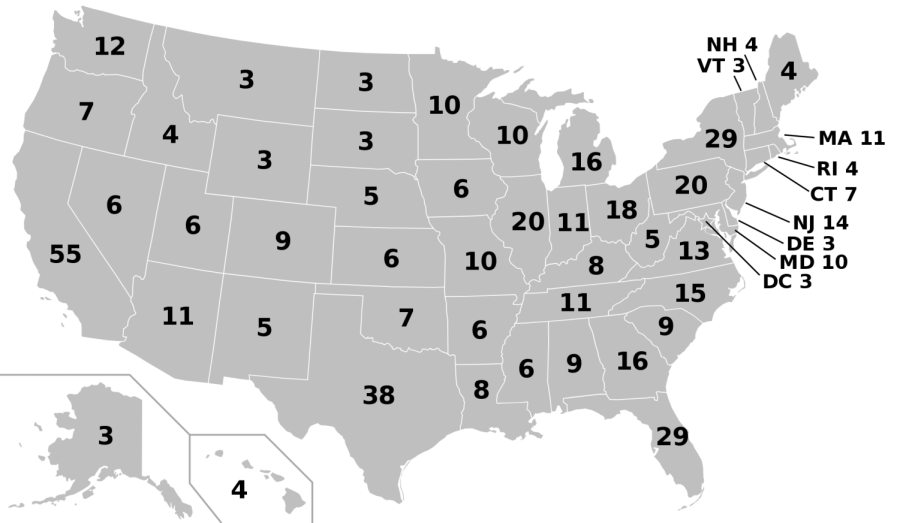 Electoral college map for the 2012, 2016 and 2020 United States presidential elections, using apportionment data released by the US Census Bureau

How Does It Work?

Unlike many other countries, the United States does not choose their leader by a simple popular vote. Instead, the President is elected by 538 electors. Each state is designated a certain number of electors based on how many members they each hold in The House and Senate. For example, Illinois has two Senators and 18 House Representatives. Therefore Illinois is given 20 electoral votes. To become president, a candidate must earn at least 270 electoral votes. If no candidate reaches that benchmark, it goes to the House, where representatives decide who will become president.

Here is an interactive Electoral map that can help illustrate the process.

An elector is a person who is usually either chosen by their party’s state committees or conventions. In an election, each party chooses electors. Depending on which party wins the majority vote of that state, that party’s electors get to vote. In 2016, when Hilary Clinton won 55% of the vote in Illinois, the 20 electors chosen through the Democratic party’s state conventions and committees got to vote for their candidate

What Is Wrong With The Electoral College?

There are many critiques that have been made about the controversial system. However, arguably the most notable and talked about, is the weight of one’s single vote. With how the system is set up, a citizen’s vote has a different weight depending on the state or district they live in.

There are two main reasons this imbalance occurs…

The second reason that Americans votes are weighted differently, has to do with The House of Representatives. Although the amount of representatives each state receives is based on population, the system is not perfect. This is partly due to the size of the country. With over 300 million citizens, it is impossible to perfectly emulate the population of a country from state to state, with one representative body. Secondly, according to the Constitution, every state gets at least one Representative, no matter their size. Although this law is clearly needed, it creates further imbalance when election day comes.

This is not unique to just Illinois and Wyoming. Every state and Washington, D.C. has a slightly different citizens to representative ratio.

Since House Representatives contribute to a state’s total number of electoral votes, the state to state differing ratios between representatives expands the issue.

Although a popular vote would correct the current issue of citizens’ votes being weighted differently, it opens an additional risk.

Many Republicans argue against converting to a popular vote. In a video from the popular conservative YouTube channel, PragerU, Tara Ross states that “in a pure democracy, bare majorities can easily tyrannize a country.”

This is a valid concern. Although extremely unlikely, there are situations in which candidates can win the popular vote, without having a single vote from a majority of states.

In the 2016 election, there were around 130 million votes that went to the two leading Candidates. Hilary Clinton actually won the popular vote, with 65.85 million votes. Donald Trump received only 62.99 million votes, but won the electoral college by a rather large margin.

In the 2016 election, Hilary won the popular vote with just under 66 million votes. In that election, the top ten most populous states contributed over 68 million votes to the top two candidates. That technically means that either candidate could have won the popular vote, without having a single supporter in 40 states. This scenario will likely never happen, because it requires candidates to have nearly 100% in 10 states.

In the 2016 election, neither Clinton nor Trump got anywhere close to 100% support in any of the top ten most populated states. The closest any candidate got was in California. Hilary was able to get 61.5%, while Trump received 31.5% in the state. In the other nine most populous states, no candidate was even close to 100%

Which One Is Better?

The scenarios for tyranny to occur are extremely unlikely as proved above. In 2016, no candidate was even close to achieving a scenario that would allow for a “bare majority” to threaten our democracy. It is not feasible that a candidate would get so much of the popular vote in one state and close to none in another, which is clearly shown based on the country’s conditions today.

However, by no means, are those scenarios impossible. Extremes can most certainly lead to a super majority taking advantage of a minority.

In the country today though , the threat of a “bare majority” is greatly outweighed by the constant imbalance of an individual’s vote, that occurs every four years because of the Electoral College.

Which do you think is a better system? Post your ideas in the comments.