The President Has Been Impeached 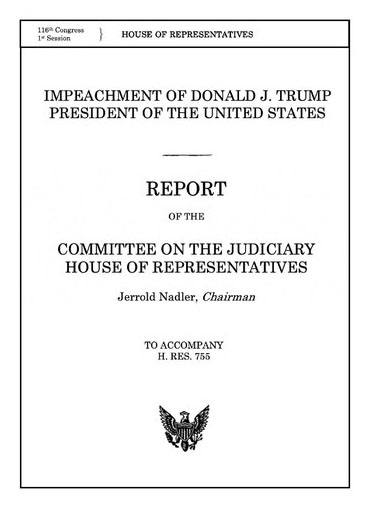 On the night of December 18th, Donald Trump became just the third president in U.S history to be impeached.

It began back in August, when a whistleblower revealed that an unusual phone call had occurred between President Trump and President Zelenskyy of Ukraine. The whistleblower wrote in a report that he/she is worried that Trump was “using the power of his office to solicit interference from a foriegn country in the 2020 U.S. election.”

In the released phone call transcript between the presidents, after Zelenskyy assures Trump that Ukraine is “ready to continue to cooperate in the next steps” in terms of purchasing weapons for defense purposes, Trump interestingly states that “[he] would like [President Zelenskyy] to do [him] a favor.” To read the unclassified call transcript, click here.

The whistleblower also wrote in the report that President Trump “sought to pressure the Ukrainian leader to take actions to help [Trump’s] 2020 reelection bid.” The whistleblower writes that he did this by ‘pressur[ing] Zelenskiy to”… “initiate or continue an investigation into the activities of former Vice President Joseph Biden and his son, Hunter Biden,” as well as “assist[ing] in purportedly uncovering that allegations of Russian interference in the 2016 U.S. presidential election originated in Ukraine.” These are likely the favors that Trump was talking about in the transcript.

The whistleblower complaint and report led to a formal impeachment inquiry being opened in September by Nancy Pelosi in the House.

This all led to the House, where Representatives voted on two articles of impeachment in December: one for abusing power, and the other for obstructing Congress.

Since the Democrats hold a majority in the House, and almost every representative voted in agreement with their party, President Trump was impeached on the night of December 18th.

What do Americans Think?

Donald Trump is a very polarizing political figure, and the issue of impeachment is no different.

According to a RealClearPolitics (RCP) poll average, 47.2% of Americans agreed with impeaching the president and 47.4% disagreed. This average was conducted with nine polls that were taken from December 8th to January 7th. These polls were conducted by: Economist/YouGov, Politico/Morning Consult, NBC News/Wall St. Journal, CNN, Quinnipiac, ABC News/Washington Post, USA Today/Suffolk, NPR/PBS/Marist and Fox News. The sample size of these polls ranged from about 900-2,000 people.

The Politico/Morning Consult Poll is used below because it had the most participants (1,995) out of any of the polls used in the RCP average. This poll was conducted after impeachment took place (Jan. 4-5). If you would like to see the whole poll, click here

Will Trump Be Removed From Office?

Although the President has been impeached, it is extremely unlikely he will be removed from office.

This omits the fact that Trump being removed depends on the Senate, where there is currently a Republican majority. Additionally, unlike the impeachment vote in the House, a two-thirds majority is required to kick the President out. In the Senate, there are currently 53  seats held by Republicans, and only 45 held by the Democrats. The last two are held by Independents, one of which is Bernie Sanders. Assuming that the Independents vote Democrat, there would still need to be 20 Republicans in favor of removal. Considering this, it is most likely that President Trump will continue and finish his term as the 45th President of The United States.