Netflix’s Green Eggs and Ham is Worth a Try 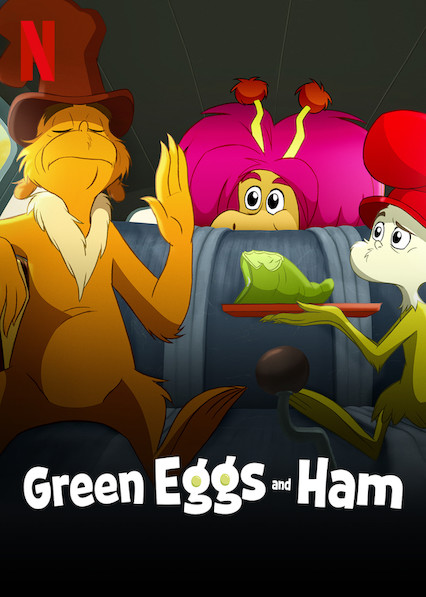 You’ll never know if you’ll like something until you try it.

As much as Dr. Seuss’ classic children’s book Green Eggs and Ham preached this message, I was hesitant to watch this 2019 show, given that my taste for Seuss adaptations has been soured. The past two decades have been filled with terrible films based on Seuss’ work from the blatant cash grabs that were 2012’s The Lorax and 2018’s The Grinch to the downright awful The Cat in The Hat (which gave American audiences nightmares when it hit the silver screen in 2003). Produced by Ellen DeGeneres, Netflix’s adaptation sought to tell the classic tale with a more fleshed out story, and the results were worth the try.

Green Eggs and Ham was a pleasant surprise in sharp contrast to many other Seuss adaptations. One of the first things that may catch your eye watching Green Eggs and Ham are the show’s visuals. Rather than opting for computer generated imagery, as in many recent Seuss films, Green Eggs and Ham utilizes hand-drawn animation. The art style itself can be best described as a more polished version of Suess’ illustration style, with fluid movements, eye-popping colors, and expressive characters. Fans of western animation are in store for a visual treat with this show.

The show tells the story of Guy-Am-I, an inventor whose inventions constantly blow up. As a result, the character has become bitter, especially after his most recent failure. He meets Sam-I-Am, an extremely happy-go-lucky guy. Despite his chipper personality, Sam lacks friends of any sort and any living family for that matter. Guy ends up getting dragged along with Sam on his quest to return an endangered animal to its natural habitat: The Chickeraffe, an amalgamation of a chicken and a giraffe that is being tracked down for the eccentric billionaire Snerz. The story itself is zany enough to live up to Seuss’ creative worldbuilding while simultaneously giving the original book an actual story.

In terms of characters, the show has many of them. In addition to those previously mentioned, there is a simultaneous side plot involving an employee of Snerz’s: a bean counter named Michellee who is overprotective of her daughter EB. Guy ends up falling for her, but the fact that they become fugitives gets in the way of things. Guy and Sam are by far the strongest characters on the show, and it’s interesting to watch how the two influence one another’s development as the story progresses. In addition to these characters, each episode introduces a one-off character (usually voiced by a celebrity of some sort) as well as a duo of people trying to track down Sam and Guy to capture the Chickeraffe for an unknown client. While the show’s large cast of recurring characters can be overwhelming, each of them was memorable in their own way, with Sam and Guy being strong, likeable, and relatable leads.

The enjoyable to watch story is made even better by high class writing. This show–this weird, Dr. Seuss show–is actually funny. Contrary to many Dr. Seuss films that have come out in the past two decades, the jokes actually land well, ranging from visual gags to well-written one liners. The dynamic between Guy and Sam is also enjoyable to watch as well. Despite the show’s colorful appearance, much of the writing caters to adults, with references and jokes that would otherwise go over the heads of the program’s primary demographic. I found myself chuckling at this more than I’d like to admit!

In general, Netflix’s Green Eggs and Ham is a show with good writing, good characters, and good visuals. While some might find the show’s appeal to kids to be a turn-off, there’s a lot for adults to chew on. Green Eggs and Ham might be worth a try.