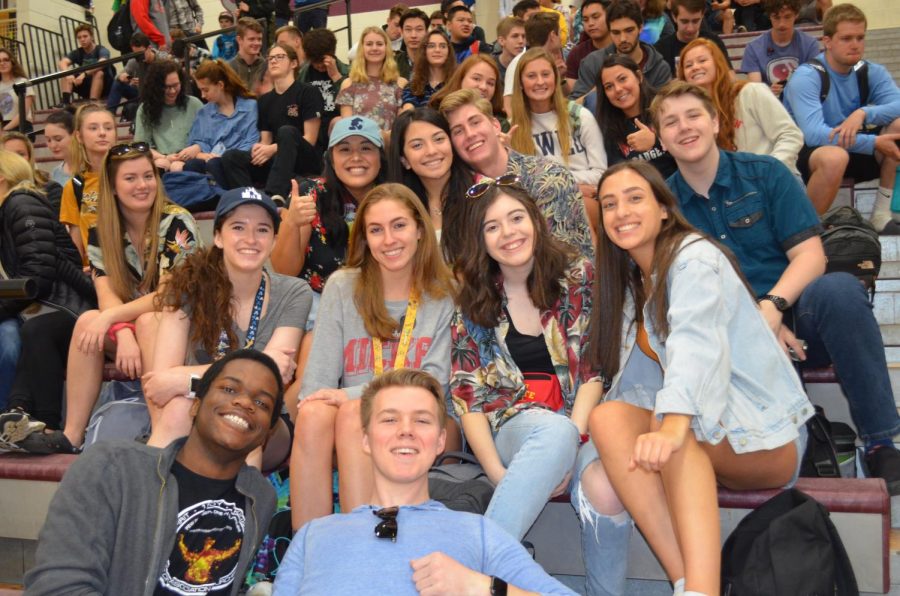 The time when I wore the flag of the Soviet Union to the AP Euro Exam.  I didn’t know it then, but I have regretted that decision for a long time now. – Adnan Noorullah

My most embarrassing moment at school was when my friend pantsed me in the cafeteria.  – Adrian Kochmanski

My terrible eyebrow skills for junior year mads dinners….let’s just say I had no clue how to fill them in nor did I need to  – Ally Akerberg

Freshman year during the Spring Play I was about to walk offstage while tied back to back with another person. During a performance I fell ONSTAGE and the rope tying us together went around my neck! I was okay, but it was definitely hard to live down almost being choked out in front of an audience of over a hundred people!  – Amber Johnson

Being so nervous that I forgot how to play the saxophone when we were individually tuning my first week in freshman band. – Bailey Schneyr

Was when I was a freshman, in gym, it was a work out day and it was one of those workouts where you had to run to the middle and do something then run back, well, while I was turning to face the side that I came from, my legs got tangled up in each other and I fell, in front of the senior class during that period, and right in front of the teacher, but I got up and played it off like a professional, or so I thought. – Bella Levitan

Every time I got hit by a volleyball – Brennen Briske

On my first day freshman year I walked into the boys bathroom. – Brooke Faron

I was hit in the back 12 times in fitness dodge ball during gym class.   – Caitlin Pieroni

Never really had one?? – Calvin Pesina

I went to a choir concert deathly sick my freshman year, and proceeded to faint on stage in front of everyone during one of our songs. There’s even a video of it….  – Cassie Beadell

Junior year I was running late from coming back from lunch in a rush, and I accidentally spilled my drink all over the back of my pants and had to wear them all day. Yes I know I could have gone to the nurse to get a new pair, but that was too much work at the time  – Cassie Cassano

Running into a trashcan while trying to say hi to an upperclassmen.  – Colette Reiche

I walked into the boys bathroom on accident my freshman year…. luckily no one was in there. – Colleen Schneider

Falling down the stairs  – Drake Regenhardt

Getting burned by Octanol and having to use the Safety Shower in the AP Chem room… with Mr. Seiler pouring water on my leg and the entire class huddled around me.  – Drew Gende

Trying to make a door frame for musical and messing it up 3 times. Wasting 100 dollars in wood.  – Ethan Munk

Being so vulnerable freshman and sophomore year. – Evan Bennett

Any of my speeches. They were trash. – Gavin Jones

Any speech that has gone poorly – Grant Jensen

When I was in choir I thought we were meant to walk off stage, but we were meant to stay on stage. I was on the opposite side of the stage and just stood in the wrong spot. I just did my best to sound like everyone else. – Hannah Szubski

Forgetting what I was supposed to say in a Spanish presentation. – Hunter Fredrick

Being the cyclops in freshman English. – Isaac Wolfinsohn

Going into Mr. Wadlington’s room and asking if he was Mr. Pelikan.  – Isabella Dimitriou

PRAC in a cheer uniform. It was embarrassing as hell, but I owned the moment and I can laugh at myself along with my friends. – Jared Greiner

Never have I ever been embarrassed – Jarred Tabor

My whole existence at PR was pretty embarrassing, let’s be real.  – Jen Briske

Tripping in the hall – Jered Marrs

Oof most embarrassing moment at PR has to be not being able to open the door from Mr. Petersen’s room and ending up 1. slamming my head against it, 2. leaving during the middle of class , and 3. having everyone watch me while this occur. – Jessica Angeles

Performing a lyrical routine at halftime for basketball games four games in a row.  – Maddi Carey

Having to run backwards in PE and falling back because I tripped over a cone. Then right after I fell running backwards, I was doing a side shuffle and I tripped over my feet and fell again.  – Maddy Kim

Talking in front of the class – Madi Sostarich

In Psych class Wads was lecturing and I stretched in my seat…except I accidentally made some weird moaning sound when I did. Wads stopped talking and everyone was just silent and looking at me. It was strange – Maggie Popovich

Nothing besides falling up and/or down the stairs… – Matt Sinchak

Definitely when I thought it was late start Monday, but it was actually a Tuesday and I had to walk into class late after lunch – Mel Hahn

Freshman year I was walking in the hall and my headphones got attached to this senior guy’s backpack in front of me. I had to follow him from the 3rd floor all the way down to the library before saying “sorry I got stuck on your backpack” LOL – Mia Jackowski

Doing a backflip in my chair in Spanish trying to reach for a pencil.  – Michael Frachalla

When my hydro flask fell out of my backpack and rolled down the stairs. It was very loud and everyone was looking at me. – Morgan Taylor

Getting a concussion in gym volleyball – Mya Parochelli

When I went to school – Nathan Ryskulov

Walking into the wrong class as a junior on the first day back. I thought I knew the exact room but I messed up and entered the wrong one. There were a bunch of sophomores and I asked the teacher saying, “I’m not in the right class, am I?” The teacher replied, “I don’t think so.” – Nick Gutowsky

I haven’t had any other than falling up stairs. – Nikki Anderson

Getting a problem wrong – Owen Hirschey

During a presentation for one of my classes, other classes came in to watch them and I messed up in front of maybe 50 people.  – Peter Blanchard

When I was so tired one day that I fully forgot one of my best friend’s name for more than 5 seconds. – Ross Relic

There’s so much I could say… My freshman year during a speech, I was so nervous that I started crying mid-sentence then just sat back down at my desk. Mrs. Billimack (At the time she didn’t have her Ph.D.) let me redo the whole thing the next day and I did SOO much better.  – Sera Trigo

Being late to a class – Steel Blew

Being rolled out of school in a wheelchair  – Victoria Trax

Back to Sophomore year in AP Seminar, we were doing an argumentative speech and I had totally blanked on my lines so I awkwardly stood there in shock trying to remember what I needed to say. I never did and just sat down. Still got a C though. – Zach Alexander