Freedom of Religion is for Everyone 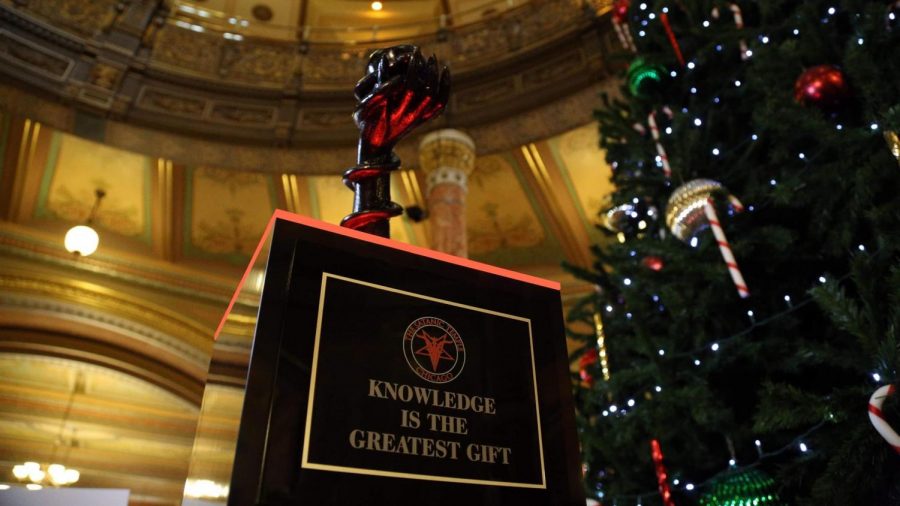 The Satanic Temple-Chicago chapter erected this display in the Illinois capitol, igniting controversy.

Yes, you read that right.

According to The New York Times (Satan Is in the Illinois Capitol. Because It’s the Holidays!), this year, not only will the Illinois Statehouse in Springfield be honoring the beliefs of Christians, Jews, and Atheists but also Satanists. Every year the capital sets out a Christmas tree, a menorah, and a solstice display with the words “Religion is but myth and superstition that hardens hearts and enslaves minds.”

The article explains that joining these three tributes this year is a statue of “a woman’s hand presenting an apple as a serpent coils around her wrist. A pentagram and the words ‘knowledge is the greatest gift’ are written on the pedestal below.”

The act has angered many conservatives in Illinois, as they see the tribute as a mockery of the Christian religion and are demanding that state officials remove it. However, heads in Springfield have come back to these citizens and explained that per our Constitutional right to freedom of religion, they cannot remove the statue.

How far can one’s freedom of religion be stretched before it turns into something possibly dark?

One of the most controversial amendments in the Constitution is also our most important one: the First Amendment. The First Amendment protects citizens’ rights to freedom of speech, religion, press, assembly, and petition. Without these rights, our government could force us to follow a certain religion, publish only censored press, and prevent unhappy citizens from expressing their concerns.

With these rights, people like the Satanic Chapel of Chicago have every right to pay tribute to their religion and can do so as freely as they please.

The First Amendment does not protect them from the onslaught of insults from angry conservatives that have attacked them and Illinois State Officials since the controversial statue was placed in the statehouse. These conservatives have no right to be upset, as many of them exercise their personal right to freedom of religion with their beliefs. It is common for conservatives to oppose gay marriage and abortion rights, defending their beliefs with references to the Bible or their religion. And they have the right to do so. But so do the Satanists who added the statue to the trio of religious symbols.

It is obvious that our state officials believe that the Satanic Chapel has the right to display their tribute to the prince of darkness, which makes sense due to our country’s support of freedom of religion.

How do other students feel? Another Crystal Lake South student explained that the Satanic Chapel has every right to display the statue, especially since their beliefs are far from devilish. They have a history of fighting for women’s reproductive rights, providing protection for LGBT youth, increasing religious tolerance, and reducing WASP-like beliefs from controlling our government. They have also publicly opposed the hateful Westboro Baptist Church, which hurts members of the LGBT community, Catholics, Jews, and government officials.

Knowing this information, it is easier to understand why the chapel attracts such a large following, and why they wanted to share their message. In fact, in The New York Times article, David Druker, a spokesman for the Illinois secretary of state’s office, even said that to him, the message that is inscribed on the small statue “knowledge is the greatest gift,” isn’t even that controversial.

In America, we take pride in allowing our citizens to be free to follow whatever religion they please, and honor that religion proudly. Yet when a peaceful group such as The Satanic Temple tries to openly dedicate a statue to their beliefs, they are attacked. Why is it that the same people who condemn members of the LGBT community to hell for being themselves become angry when another religious group attempts to peacefully present their devotions?

The holiday season is a time to be charitable and kind to those around you, even if they different religious beliefs than you. Whether you are Christian, Jewish, Atheist, or a Satanist, respect the religious beliefs of others, and rest well knowing that the Illinois Statehouse will protect your religious freedom.