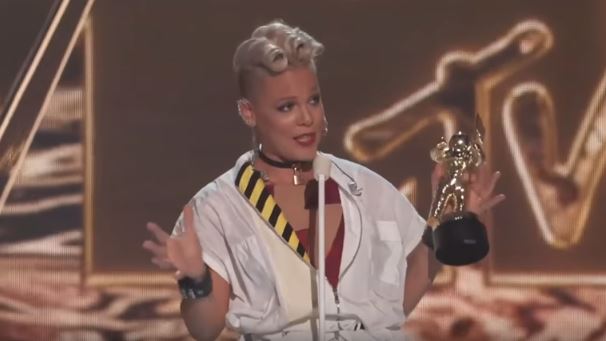 P!nk accepts the Michael Jackson Video Vanguard Award and delivers a message of self empowerment!

“We don’t change. We take the gravel and the shell and we make a pearl. And we help other people to change so they can see more kinds of beauty.”

The recording artist Pink recently was awarded the Video Vanguard Award at the VMA’s, and in her acceptance speech, she took the time to encourage and empower young girls feeling self-conscious about their appearance.

She told the story of how her 6 year old daughter came home from school thinking she was ugly, simply because she thought she looked like a boy. Pink responded by showing her a series of photos of famous artists, including Prince and Janis Joplin, that aren’t stereotypically masculine or feminine, proving to her that it doesn’t matter what you look like or how society perceives you, it’s how you impact others.

In today’s society, her message is rarely heard, especially in the lives of impressionable high school students.

Here at Prairie Ridge, reactions to the speech were very positive. Senior Audrey Peterson thinks that “the speech makes her a good role model for girls.”

Junior Hope Yeomans thought the message was well-aimed and applicable to a much larger audience, saying “I like how it was a story so everybody could relate to it, and not just that she was a little girl, but everybody.”

Instead of getting up on stage and thanking everybody who helped her get to where she is, she used the platform to speak up for a cause she was passionate about.

And because of her daughter’s age, the story is much more impactful. Audrey Peterson adds, “I think the problem the daughter had is the same as other little girls.” More and more girls need a strong role model to look up to, and increasingly stars like Halsey, Miley Cyrus and Shailene Woodley have proved you don’t need long hair to preach positive messages.

Senior Jillian Lenczewski was inspired by Pink’s speech. “I feel like it’s a message a lot of people need to hear. She didn’t say, ‘this is what you need to be,’” a message silently enforced by social media, but “you are beautiful the way you are.”