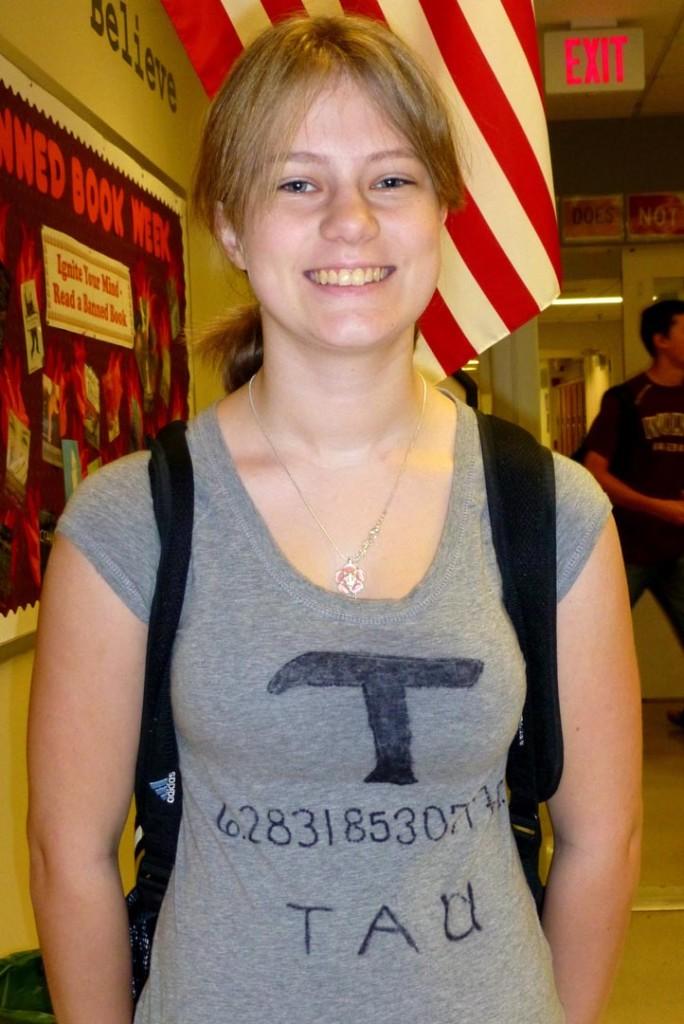 “Let’s say you’re me and you’re in math class and you’re supposed to be learning Trigonometry but you’re having trouble paying attention because it’s boring and stupid. This is not your fault. It’s not even your teacher’s fault. It’s pi’s fault, because pi is wrong.” Victoria (Vi) Hart proclaims valiantly in her top-rated YouTube video, “Pi is (still) Wrong.”

Now any self respecting mathematics-loving person would laugh at anyone who would dare try go against any number so widely known and used as pi. Of course, when Vi says this, she does not mean that pi as a number is wrong. The numerical value of the circumference of a circle divided by its diameter is about 3.141592653589793. What she means is that pi should not be used as the fundamental number of circles, or the circle constant. Pi makes every single calculation including it a complete mess. And this is for a simple reason. You don’t define a circle by its diameter. You define it by its radius.

This is where the all powerful, amazing, simplifying, revolutionary part of this article comes in, Tau. Its symbol is very similar to pi’s, and is τ. If you are changing an equation from pi to tau, there is a very simple calculation. 2π=τ (or ½ τ=π), or is about 6.283185307. This is because Tau uses the radius, rather than the diameter, to define a circle. So it is equal to c/r. And this makes sense. If you make a circle with a radius of 1, the circumference would be exactly tau. You may ask, well ok, how does this make calculations simpler? Well think about a very simple equation involving pi. c=2πr. (See that 2π? That happens a lot. Look for it. ) Let’s try rewriting this equation. c=2(c/d)r, since pi=c/d. if you think about it, d=2r, so you could also say it’s c=2(c/2r)r. You can then rewrite it as, c=(2c/2r)r. cancel out the 2, c=(c/r)r. Hey, where have you seen that c/r before? c=τr. And that makes sense. If a circle has a radius of one then it has a circumference of τ, then a radius of 2 would be 2τ, and so on. Easy.

Now anyone who has seen a protractor or has been in Geometry knows what degrees are. When looking at a diagram showing these degrees. However, they can be related to ratios, usually which are drawn using pi. When it’s written like this, they are called radians. Now here’s the confusing part. The full 360° of a circle does not equal pi. It equals 2π (remember I told you about that?) So if I make you a pie, and you say, “I would like π/8 of that pie” than I do not hand you a nice warm 1/8 of that pie. You get 1/16 of the pie. And if you want half of the entire pie because you are just starving and love apple, you get one π. One fourth of a pie is 2/π, and so on. However, 360° is one tau. Half, or 180° is τ/2, one fourth, or 90° is τ/4. Amazing! This is because of that nasty coefficient of 2. If one full turn around a circle is 2π, so 2π divided by 4 is 2π/4, which simplifies to π/2. Tau does not have a coefficient, and makes everything nice and clean.

There’s another equation that I find very interesting, but if you are not in higher math groups, just skip this paragraph. Its Euler’s Identity, sometimes called the most beautiful equation in mathematics, due to the fact that it contains e, i, π, 0, and 1. It is usually stated as eiπ=-1. Now this -1 is usually so ugly that it is rewritten as eiπ+1=0. Beautiful, isn’t it? Now this is not Euler’s formula, but rather, eiθ = cosθ + i sin θ . When evaluated using τ=θ, the equation becomes eiτ=1. I am not going to go into the complex telling of why this works, but look on tauday.com/the tau manifesto for a full explanation. But believe it or not, some people actually complained about this one, as eiτ=1 does not include 0, therefore ruining the “beauty” of Euler’s Identity. So Michael Hartl, one of the main advocators for tau and the maker of tauday.com, came up with a solution. eiτ=1 + 0. It now it really has all of the most important numbers in mathematics. e, i, 1, 0 and tau!

I am sure that there is one more equation that you are thinking of that includes pi. This is one of the only pi equations in mathematics that does not have the fabled 2π. Although tau does not simplify the solving of this equation, it does make it easier to understand. You guessed it, the area of a circle. A=πr2. When you re-write this one it makes 1/2τr2 and even I, an avid lover of tau, having memorized over 50 digits of it (seriously, come up to me and I will sing a song including some 50 digits of tau), must admit that it is not a pretty equation. However, it is very important to the understanding of the concept. Think of it as ½ × τ × r × r. If c=τr, then we can use substitution to write it as 1/2cr. So the Area is equal to half of the circumference times the radius. And it turns out that Archimedes, the original writer of the circular area formula, had not written it as πr2, but as the area of a triangle if the base of a triangle is c and the height is r. And the formula for the area of a triangle is 1/2bh, and if the b is c and height is r, then it 1/2cr. This means that one half the circumference times the radius is the area.  And 1/2cr=1/2τr2. Archimedes, usually called the original discoverer of pi, had written his equations in tau!

These are not the only equations involving pi, and please do not say that these are the only ones made better by tau. There are dozens more on tauday.com/tau-manifesto, and although I did not want to get to in-depth today, if you are interested I would really implore you to look it up.

Now one of the final and most important complaints against tau is one of the simplest ones. If one half tauday (sometimes called pi-day) is March 14, and tauday is June 28 (6.28) then what do we eat on tauday? No more pie? And to this I answer with a smile, tau=2pi my friends. Eat two pies, and no longer be constricted by the one pie of March 14.  Enjoy your deliciousness.